Spice up your next event with all the glitz and glamour that a Hollywood Theme Party can offer. From red carpets to paparazzi photo ops everybody leaves feeling like a celebrity!

In fact, there are plenty of reasons to throw a Hollywood theme party. During awards season, throwing a corporate Hollywood theme party provides a welcome escape from the mundane. in addition , it’s a a fun and exciting adventure, especially if you design ahead of time! Let us help you plan properly, and consider all of your options.

Like LA’s position between the steep, granite peaks of the San Gabriel Mountains and the unbounded Pacific Ocean, the city’s reputation is stuck between the valley and a sun-kissed bohemia. Of course, those who call Los Angeles home know which of those stereotypes is true. Yes, the weather is perfect. But there are so many more under-the-radar reasons why people love the City of Angels. After all, it’s the moments, places, and experiences that make living there so pleasant and unbelievably magical. Sometimes it’s hard to tell whether you’re still alive or have died and gone to heaven. That’s why we love LA and a great Hollywood theme party. 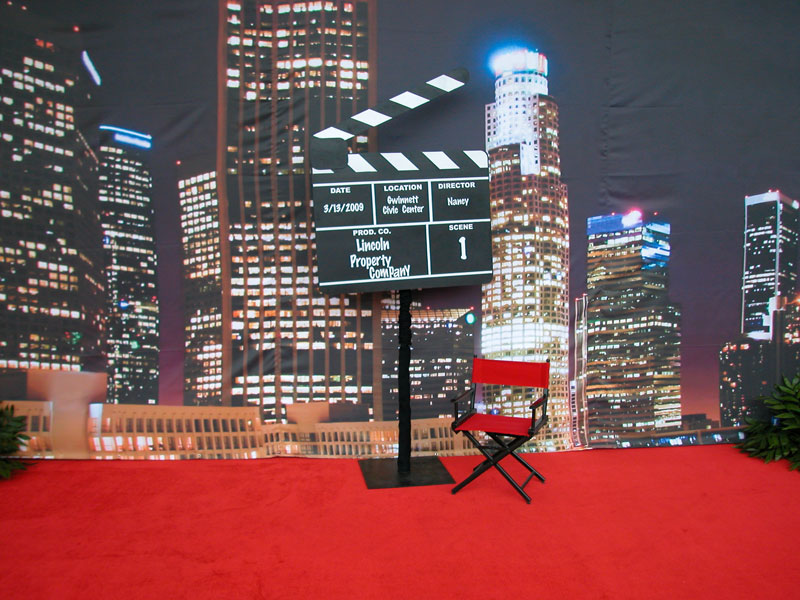 No Hollywood Theme Party is complete without the Hollywood sign itself.

Indeed, the Hollywood Sign on the slopes of Mount Lee in Los Angeles is one of the most recognizable and photographed landmarks in the world. In a word, its nine white letters have come to symbolize all that glitters. Likewise, they metaphorically represent ambition, glamour and dreams of success: H-O-L-L-Y-W-O-O-D. And you can expect the same from an MCP Hollywood theme party.

The current sign, dating from 1978 and classified as an Historic Monument, is anchored by 194 tons of concrete. It also carries a steel frame and corrugated baked enamel letters. The letters are four stories high, 450-feet long and weigh 480,000 pounds. It was completed in time to celebrate Hollywood’s 75th Anniversary and was specially illuminated for the 1984 Summer Olympics in Los Angeles.

See our replica here, lovingly handmade by our graphics team. Not as heavy but with the same amount of punch!

So lets shout out a huge HOORAY for this Hollywood Theme Party!